Sanders, who started his campaign in Iowa roughly 9 months ago, rallied against what he calls “establishment politics” and a “corrupt campaign finance system.” His supporters are mostly young people, who connect with him on Facebook and Twitter. His campaign staff connect with his supporters and volunteers mostly by text messages. His operation in Iowa is deeply reminiscent of the Obama campaign of 2007-2008.

Official Iowa results have the race at 49.9% to Clinton and 49.6% to Sanders – but what matters in Iowa are the delegates, which we predict will be divided evenly at 22 delegates to each candidate.

We call Iowa a win for Sanders and his campaign tonight due to his enormous underdog status.

His rival, Hillary Rodham Clinton, has dominated news cycles and been in the national political spotlight for an entire generation. During her speech tonight, where she was careful not to specifically claim victory, her husband Bill Clinton stood directly behind her throughout the speech.

Bill looked at Hillary the same way internet memesters claim Joe Biden looks at Barack Obama: with huge, proud eyes and respect. There could have been no better imagery on the Hillary Clinton stage tonight.

The crowd at the Sanders rally erupted when Sanders declared “the results are still not known, but for now we are in a virtual tie.”

I participated in my first caucus in 2008, in Muscatine County for Barack Obama. I started supporting him around October 2007; I recall seeing a TV ad from Chicago featuring his senate run and thinking “Wow, this guy seems great.”

Tonight’s caucus was extremely reminiscent of that time. I’ve since moved, and so it was with all new people, but the results were the same for me. We had 61 people to her 46 people, and both candidates wound up getting an equal amount of delegates (2 each, from my precinct).

I imagine many caucuses and caucus-goers around the state felt the same.

But the Sanders stage had the look and feel of Obama ’08 all over again. Numerous times his speech was interrupted by supporters chanting “Feel The Bern.” To everyone in the room and everyone watching on TV, Bernie Sanders gave a victory speech and Hillary Clinton gave the concession. 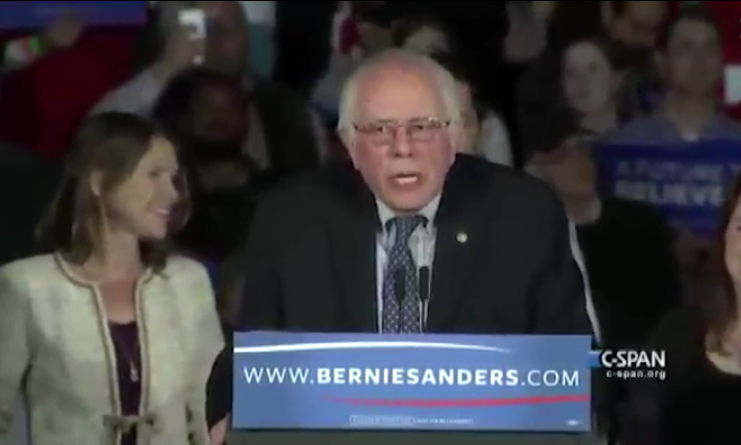